In a challenge to the Supreme Court ruling legalizing same-sex marriage, a group of conservative South Carolina lawmakers filed a bill to recognize marriage as solely between one man and one woman.

Any other union would be deemed a “parody marriage,” according to the bill’s language.

Filed the day after Valentine’s Day, the “Marriage and Constitution Restoration Act” is sponsored by six Upstate Republican House members.

The bill argues the state is “prohibited from favoring or endorsing religion over non-religion” and that “the State of South Carolina’s decision to respect, endorse, and recognize parody marriages and sexual orientation policies has excessively entangled the government with the religion of Secular Humanism.”

The bill claims it is unclear whether sexual orientation is genetic “and therefore is a matter of faith.”

State Rep. Steven Long, R-Spartanburg, the bill’s main sponsor, said the legislation is about upholding the Constitution by maintaining a separation of church and state.

“Whatever someone does in their own time and in their own home is their business, but when it comes to the government in the state, we have to have policies that are nonreligious or secular in nature,” Long said.

Secular humanism is defined as a nontheistic religion antagonistic to traditional religion, according to the Merriam-Webster dictionary.

The legislation is one in a multi-state push to reignite the same-sex marriage debate three years after the Supreme Court ruled that states must allow and recognize same-sex marriage as equal to marriages between heterosexual couples.

A nearly identical bill was filed in Wyoming on Valentine’s Day.

The architect behind the bills is Chris Sevier, an attorney who has long pushed a campaign against same-sex marriage. Now based in Columbia, he has unsuccessfully sued states for the right to marry a laptop computer to make a point about rulings on same-sex marriage.

Sevier said he used the term “parody marriage” because he views any marriage that is not between a man and a woman as “an impersonation of actual marriage.”

He plans to shop this bill’s framework to all 50 states.

“There’s nobody in South Carolina — no baker or florist or photographer — who is subject to being persecuted because the clerk’s office issued marriage licenses to one man and one woman,” Sevier told The Post and Courier.

“We’re not saying homosexuality should be illegal, we’re saying the state shouldn’t give them special benefits based on them self-identifying as homosexuals,” he said.

State Rep. Rick Martin, R-Newberry, is one of the bill’s co-sponsors. He said Long pulled him aside last week to ask whether he believed in traditional marriage.

“As a Christian, of course I do,” Martin said. “We have to take a stand in one form or fashion. This is how I feel and this is how I stand. For the most part, I know my constituents feel the same way.”

SC Equality, the state’s largest LGBT rights organization, issued a statement Monday condemning the bill for being a “bigoted and narrow-minded attempt to legalize discrimination.” 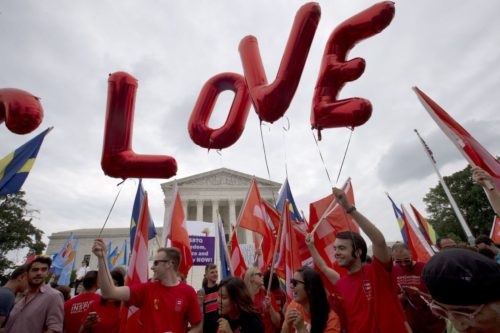 Balloons spell out the word “love” over the Supreme Court in Washington on Friday June 26, 2015, after the court declared that same-sex couples have a right to marry anywhere in the United States. File/Jacquelyn Martin/AP