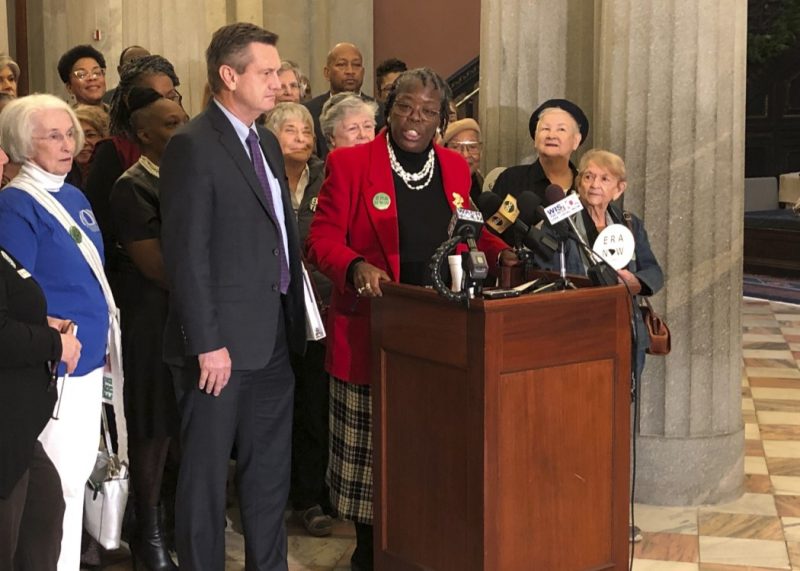 One of South Carolina’s most liberal lawmakers and one of its most conservative are joining together to revive the Equal Rights Amendment to the U.S. Constitution.

The 1970s ‘ proposal banning any discrimination based on sex is being revived in several state capitols across the U.S. It is just one state away from the 38 needed before it can become the 28th amendment to the Constitution.

But there is one other hurdle: a ratification deadline. Congress extended an initial 1979 deadline to 1982. Supporters acknowledge they will likely need the current Congress to grant another extension. Barring that, they will have to go to court.

Rep. Gilda Cobb-Hunter introduced a resolution in January to ratify the amendment in South Carolina, an action that she said would send a powerful message no matter what happens elsewhere.

“The effect it would have is simply saying to the women of South Carolina you are no longer second-class citizens,” said Cobb-Hunter, a Democrat from Orangeburg.

The lawmaker was joined Wednesday by state Sen. Tom Davis, a Republican from Beaufort who served as former Gov. Mark Sanford’s chief of staff.

Davis said any conservative who supports a limited government that allows people to succeed based on their intelligence and ability should support the Equal Rights Amendment. The amendment’s text states simply that “equality of rights under the law shall not be denied or abridged by the United States or any State on account of sex.”

“That’s what constitutional principles are,” Davis said. “They are general expressions of what we stand for as a society. You look at the Bill of Rights, freedom of religion, assembly, speech and the press: very simple declarations.”

Women have achieved rights throughout the years even without passage of the ERA. Among them is the elimination of laws that failed to recognize rape within a marriage. Women also now represent the majority income earners in 4 out of 10 households —up from just more than 1 in 10 when the amendment was proposed — and hold more military combat roles.

The Equal Rights Amendment was passed by 35 states before the 1982 deadline. It then sat dormant until Nevada lawmakers passed it in 2017 and Illinois followed in 2018, putting it close to the three-fourths of states that need to ratify it for it to go into effect.

Nearly all the states that failed to ratify the amendment are in the South. Current ratification efforts are also underway in Arizona, Florida, Georgia, North Carolina, Utah and Virginia, where the Democrats took control of the Legislature in November’s election.

On the other side, several states have suggested they may withdrawal their approval because of the 1982 deadline.

South Carolina resident Tootsie Holland led a group pushing the General Assembly to pass the amendment in 1972, but ran into opposition from another institution in the state: textile mills, which paid female workers significantly less than their male counterparts.

“The owners of these mills really did a hell of a lot of lobbying against us — ‘Oh, these women will want to get a raise,’” Holland said at a rally at the statehouse Wednesday.

Her remarks in favor of the amendment drew cheers from both men and women, many of whom were born after the ERA was first proposed nearly 40 years ago.