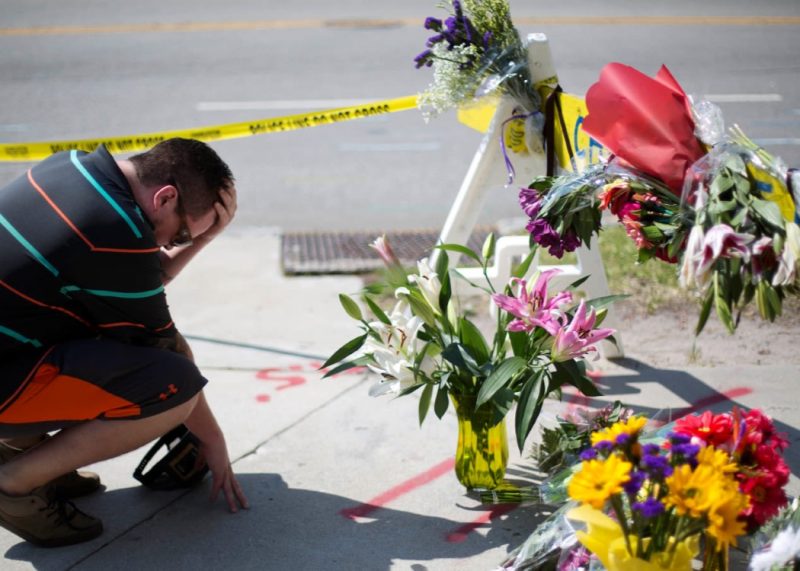 Federal statistics show hate crimes in South Carolina are increasing. Those stats also appear to highlight the fact that this state doesn’t have a hate crime law.

From 2013 to 2017, hate crimes reported in South Carolina increased by 70 percent, according to data from the Federal Bureau of Investigation. The number of S.C. agencies reporting hate crimes increased from 39 to 46 in those years.

The Federal Bureau of Investigation is the only law enforcement agency that can pursue a hate crime charge in South Carolina, said Don Wood, spokesperson from the FBI’s Columbia office. South Carolina, Georgia, Wyoming and Arkansas are the only states without specific hate crime laws.

State and local law enforcement agencies are provided instructions by the FBI on precisely what is a hate crime. However, Wood said those agencies are not required to report such crimes to the FBI.

“If someone is assaulted and the perpetrator admits he did so because of the victim’s race, that agency could advise the FBI that was a hate crime while investigating it and/or labeling it as merely an assault,” Wood said in a recent email to The Herald.

YORK COUNTY CRIME PROMPTS ACTION
York County Sheriff’s Office in November arrested two people in connection with a 2009 fire set at Pak’s Martial Arts Fitness Center. The fire destroyed the building. Racist anti-Asian graffiti had been spray-painted on the building before it burned. The sheriff’s department suspected it was a hate crime.

The center was owned by Korean immigrant Sang Kun Pak. More than nine years after the center was demolished, police charged Robert Allen Lester and Catherine Paige Neal with arson, conspiracy and burglary.

At a press conference after the arrests, York County Sheriff Kevin Tolson said the crime had a racial hate element to it, The Herald previously reported. But deputies couldn’t charge Lester and Neal with a hate crime because there is no S.C. hate crime law. A hate crime charge would have to come from federal authorities, he said.

Trent Faris, spokesperson for the York County Sheriff’s Office, said the case is being investigated as an arson case. Faris said the FBI reached out to the sheriff’s office in reference to the incident as a potential hate crime, but no formal report was made.

Wood said in an email: “Not sure how York County ‘reported’ it to us, or if it did. We have York County deputies as Task Force Officers and lots of times there’s no formal ‘reporting.’”

Pak operates the studio in Rock Hill with his family, including son Daniel Pak. Daniel Pak said the case is ongoing and declined to discuss details.

As a result of the arson, State Rep. John King, D-York, said he introduced a bill in 2009 that would make it a felony to commit a hate crime.

The bill, which is now co-sponsored by State Rep. Gilda Cobb-Hunter, D-Orangeburg, didn’t get much traction. But King continued to reintroduce it each year. Under the bill, which is still in committee, anyone found guilty of a hate crime could be sentenced two to 15 years in prison.

“People cannot feel unsafe in this state,” King said. “And it is our responsibility as elected officials to make sure that they are safe.”

“If any hate crimes are not being captured, statistically speaking, by the FBI, it is a failure of the law enforcement agency to report it,” Wood said. “Or the incident itself was not reported to law enforcement, or facts were not established to denote the event as a hate crime.”

It’s likely there are more hate crimes occurring in the state that are not being investigated as hate crimes, said State Rep. Wendell Gilliard, who is also proposing a state bill that would make hate crimes a punishable offense.

In 2015, when a white supremacist shot and killed nine African-Americans at Charleston’s Mother Emanuel AME Church, Gilliard, who represents the district where the church is located, said he knew it was time for a change.

“That was the straw that broke the camel’s back with me,” Gilliard said.

Gilliard introduced a bill that would make it a felony to commit a crime “with the intent to assault, intimidate, or threaten a person because of his race, religion, color, sex, age, national origin, sexual orientation, or homelessness.”

The bill passed the Criminal Law Subcommittee in May and will be heard by the House Judiciary Committee in January, Gilliard said.

“If you just look at the history, we can talk about the Civil War,” Gilliard said. “We can talk about people being enslaved. But what’s clear and present now is hate groups that are on the rise, not only in the state of South Carolina but also across the country.”

King, who is one of the 27 co-sponsors of Gilliard’s bill, said he doesn’t care which of the two hate crime bills is signed into law. He said he wants to work with all sponsors of hate crime bills to enact a law that will protect the people of South Carolina.

NEED FOR LEGISLATION
On Aug. 5, Gilliard and Rep. Wendy Brawley, of Richland, called on Republican State House leaders to demand immediate action, after a weekend of deadly mass shootings in El Paso, Texas, and Dayton, Ohio, shook the country and left 31 people dead.

In a joint letter to Gov. Henry McMaster, Gilliard and Brawley asked that GOP leaders call state lawmakers back to Columbia for a special session to discuss gun and hate crime legislation.

State Sen. Greg Gregory, R-Lancaster, told The State newspaper he would return to Columbia for a special session.

At a news conference on Aug. 8, Richland County Sheriff Leon Lott said he wasn’t able to take further action against a former high school student who recorded racist videos that depicted the killing of a black person. Lott pointed out that there is no state law that allows him to pursue charges, The State reported.

In the videos on Twitter recorded in May, the student, whose name was not released because he is a juvenile, said he was a “hater of all black men” and used racial slurs to describe African-Americans. He repeatedly shot at a “box of Jordans — the favorite pair of shoes for a black man” with an assault rifle and a shotgun. At the end, he said: “Thank you for watching my PSA. F— all n——.”

Lott said he believed a hate crime law would have allowed his department to file more charges against the student.

“You look at this video and I think that is probably a definition of what a hate crime is,” Lott said at the news conference. “And there’s no law against that in South Carolina.”

Despite the “shocking and disturbing” nature of the videos, Richland County Sheriff’s Department investigators, in coordination with the U.S. Attorney’s office, determined no crime had been committed under state law, Lott said.

Two days later, deputies were informed of a text message sent in May by the student in the video, threatening to “shoot-up the school,” Lott said. Police charged the student with threatening a school, The State reported.

“It is an absolute shame that this state does not have a law against hate crimes,” Lott told The State. “If this is not an example of why we should have a state law, I can’t imagine anything else that could happen. Our legislators have got to take some action.”