As I write this letter to you today, I reflect on the advancements the LGBTQ community has made in recent years, not only nationally but here in our home state, and fully aware of the challenges will still face each and every day.
In addition to fighting and defeating anti-LGBTQ bills this session, SC Equality focused on promoting and passing pro-equality legislation such as protections for LGBTQ employees in the workplace. I am fully aware, time and time again, that in order to achieve success in lobbying for equal rights at the statehouse (with the current makeup of the General Assembly) that compromise is a key factor.

AMEND THE CODE OF LAWS OF SOUTH CAROLINA, 1976, SO AS TO ENACT THE “WORKPLACE FREEDOM ACT”; TO AMEND SECTIONS 1-13-20, 1-13-30, AS AMENDED, 1-13-70, 1-13-80, AS AMENDED, AND 1-13-90, ALL RELATING TO PROHIBITING DISCRIMINATION IN EMPLOYMENT BECAUSE OF RACE, RELIGION, COLOR, SEX, AGE, NATIONAL ORIGIN, OR DISABILITY, ALL SO AS TO ALSO PROHIBIT SUCH DISCRIMINATION BECAUSE OF SEXUAL ORIENTATION OR GENDER IDENTITY AND TO DEFINE “SEXUAL ORIENTATION” AND “GENDER IDENTITY”.

SC Equality worked day and night on strategy, building coalition partners and meeting with members on both sides of the isle to garner support for this historic piece of legislation. The Workplace Freedom Act is good for our economy and, most importantly, it affirms the basic human rights of our LGBTQ community.

During the process of SC Equality’s “behind the scenes work” on this bill, basically going around to each legislator and asking for their support, we became optimistic of a chance to pass H.3786 this legislative session.  However, we were offered a compromise by Republicans that would amend the language to delete “gender identity” but leave “sexual orientation”. Even confronted with assurance that we had the votes (on both sides of the isle) to pass this bill out of the full House with the amended language, my answer was a clear and loud “No”.

I was asked by the ones offering the compromise “why would you not support a bill that at least protects some of your community?”.  Let me say this.  I found solace in the fact that we have come a long way and to even have an opportunity to pass a pro-equality bill here in South Carolina of all places.  Such a compromise would not have been offered just 2-3 years ago. But the idea of supporting a bill that leaves a segment of our community behind, individuals who need such workplace protection more than anyone else, is unconscionable.

I have stated many times over the years “we are all in this together and a fight with one is a fight with us all”. I know that some of you might disagree with me and would have accepted the offer. Let me explain in more detail why I made the right decision for the entire LGBTQ community in South Carolina.

Nondiscrimination protections – and the lack thereof – have played a growing role in South Carolina’s political discourse over the last several years.

Transgender workers face scattershot legal protections, numerous obstacles in workplace cultures, and high levels of harassment and abuse. The key to trans friendly workplaces lies in better understanding their unique challenges and adjusting practices and policies to their varied needs.

With an unemployment rate three times higher that of the U.S. average, much of the transgender employment discrimination faced by these workers reveals itself in the employment process.

In an ideal world, of course, being transgender would be about as relevant to the job application process as having brown eyes. But in the current environment, accepting the unfortunate inevitability—or at least, the likelihood—transgender South Carolinians face unimaginable obstacles in the workplace.

While some trans friendly workplaces exist nationally, here in our state, tragically, transgender employees still frequently experience targeted harassment and discrimination. While reported rates of such treatment vary nationally, according to a recent survey, 90 percent of respondents claimed to have “directly experienced harassment or mistreatment at work.”

This harassment and mistreatment can manifest in several ways—survey respondents noted the following rates of mistreatment:

Therefore, we will not support a workplace bill that is not all inclusive. I know you all stand in agreement with me on this.

There is more work to be done and we will continue to educate lawmakers on all of these issues and will never give up on our goal of a South Carolina where “Equal Means Everyone”. 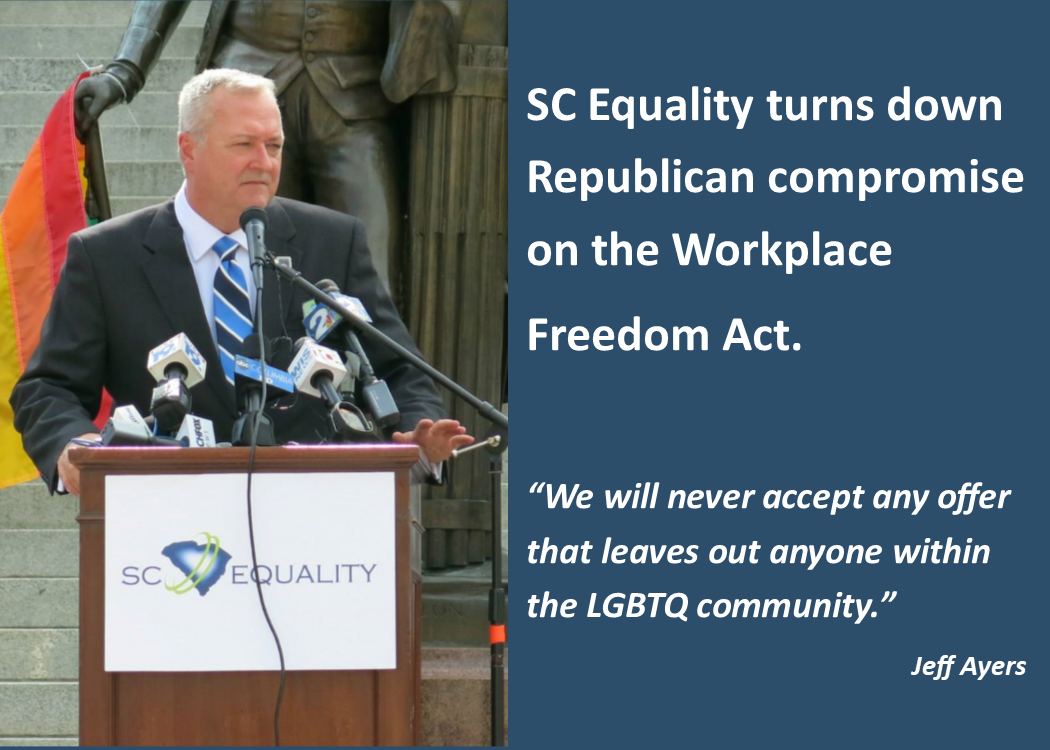