With President Trump facing low approval ratings, signs continue to point to a political wave against him in this year’s mid-term elections — and LGBT candidates are hoping to benefit.

A record number of openly LGBT candidates are running for office, many in high-profile statewide races, which could result in a milestone election for a group that has been historically underrepresented.

Annise Parker, CEO of the Gay & Lesbian Victory Fund, predicted LGBT candidates endorsed by the organization in 2018 “are going to do well.”

“We’re in this business because we think our candidates are going to do well in any election, but we don’t see just a Democratic surge, we actually see a progressive surge across the United States,” Parker said.

Parker added, “we’re going to have more LGBT candidates than we have had ever in our history,” but also candidates who are women and people of color also stand to make historic wins.

“Even though those candidates who aren’t from our community and wouldn’t be our endorsed candidates, I think they’re going to help carry the banner for us a little bit,” Parker said.

Signs are strong that Democrats will pick up seats in 2018, which is consistent with the historical trend of the party in opposition to the party of the president gaining seats in the mid-term elections.

In every mid-term election, the president’s party loses an average of 32 seats in the U.S. House and two seats in the U.S. Senate. (The only exception to these losses in recent years has been in 1998 and 2002 due to extraordinary circumstances. In 1998, there was outrage over the impeachment of President Clinton. In 2002, there was an anti-terrorism sentiment after the attacks on 9/11.)

A CNN poll published in December found 56 percent of respondents say they’ll most likely vote for a Democrat in the mid-term election compared to 38 percent who say they’ll vote Republican. According to CNN, that 18-point advantage is the biggest since the organization began polling on the 2018 election and the widest margin in two decades at this point in the election cycle.

Part of the effort for Democrats to win control of Congress will be LGBT candidates seeking election to the House and Senate. In Wisconsin, Sen. Tammy Baldwin (D-Wis.), the only out lesbian in Congress, will seek to keep her seat in the Senate.

That seat might be a challenge for Democrats to hold even in a good election cycle. The Huffington Post’s Amanda Terkel published an article this month titled, “Wisconsin Is Quietly Becoming The Top Senate Race Of 2018.”

According to the article, conservative groups have reported spending at least $3.1 million against Baldwin, which is more than what all the other Democratic Senate incumbents on the ballot this year have faced combined.

But that only counts the reported money, not the dark money coming from groups that don’t have necessarily have to report their contributions to the Federal Election Commission. Nine groups have spent more than $4.7 million on ads that attack Baldwin or boost one of the Republicans seeking to unseat her, according to the article.

Parker said conservative groups are targeting Baldwin because she’s “focused and effective and doing a great job in the Senate.”

“It’s going to be a tough re-elect for her, nor just because she’s going to have opposition on the right, but because there’s already evidence of a massive independent expenditure campaign against her,” Parker said. “If she weren’t so effective, I don’t think they’d be dropping the millions of dollars that they are to try to defeat her.”

Parker said she doesn’t believe these groups are targeting Baldwin because of her sexual orientation, but because “she has been an effective progressive voice in the Senate.”

“They’re looking at the last presidential campaign and trying to project from that,” Parker said. “I don’t think that that’s going to be successful.”

Meanwhile, Rep. Kyrsten Sinema (D-Ariz.) is running for the U.S. Senate seat in Arizona being vacated by retiring Sen. Jeff Flake (R-Ariz.). If Sinema is elected, she’d be the first openly bisexual person elected to the Senate.

Sinema’s race could be interesting because a slew of right-wing candidates seeking the nomination could be her opponent in the general election.

Parker said the Victory Fund is “working hard” on Sinema’s race because “that’s an opportunity to move a seat into a progressive column.”

“Considering who’s on the Republican side of that race, it’s going to be a very clear pro-LGBTQ progressive candidate versus a right-wing ideologue, whichever one of them comes through,” Parker said.

A number of non-incumbent LGBT candidates are also running in U.S. House races and seeking to take seats from Republican candidates.

Richardson is running for the seat currently occupied by Rep. Ileana Ros-Lehtinen (R-Fla.), who’s considered the most pro-LGBT Republican in Congress and announced she’d retire at the end of this year. Richardson’s prospects are strong in the heavily Democratic district that Ros-Lehtinen has maintained for years.

Meanwhile, gay Reps. David Cicilline (D-R.I.), Sean Patrick Maloney (D-N.Y.), Mark Pocan (D-Wis.) and Mark Takano (D-Calif.) are seeking to keep their seats in the House and will likely prevail given their incumbent status, favorable districts and strength of Democrats in 2018.

Other LGBT candidates could replace Democrats who are leaving their seats at the end of this year. In New Hampshire’s first congressional district, State Rep. Chris Pappas is seeking to claim the seat being vacated by retiring Rep. Carol Shea-Porter (D-N.H.).

No fewer than 12 candidates are seeking the Democratic nomination, including three LGBT candidates. They’re Rufus Gifford, who’s gay and served as U.S. ambassador to Denmark in the Obama administration; Steve Kerrigan, who’s gay and ran to become Massachusetts lieutenant governor in 2014; and Alexandra Chandler, who’s transgender and a former Navy intelligence specialist.

If LGBT House and Senate candidates win each of these races, it could significantly shake up LGBT representation in Congress and potentially more than double the number of six openly LGBT public officials currently serving. A victory for Chandler would make her the first openly transgender person elected to Congress.

LGBT candidates are involved in other significant state races. At the top of the list are the gubernatorial campaigns of Rep. Jared Polis in Colorado and State Sen. Rich Madaleno in Maryland. Should either of them win, they’d claim the distinction of being the first openly gay people elected as governor in the United States.

In Oregon, Gov. Kate Brown, who’s bisexual, is seeking re-election. In 2016, she already claimed the distinction of being the first openly LGBT person elected as governor.

In Texas, the “blue” wave could result in the election of a record number of LGBT candidates running for office at various levels of state government. The Houston-based OutSmart Magazine reported 42 people are running for office in Texas, including two candidates for governor: former Dallas County Sheriff Lupe Valdez and Dallas businessperson Jeffrey Payne.

Parker declined to identify her highest priority race for 2018, but said the Victory Fund’s “bread and butter is local races.” Also important, Parker said, are Baldwin and Sinema’s races for Senate seats and the gubernatorial elections with gay candidates.

When analyzing candidates to support, however, Parker said the Victory Fund doesn’t take into account whether a year will be a Republican or Democratic wave.

“It’s going to be great for our candidates, but it’s not what we depend on, it’s not what we look at when we’re vetting them,” Parker said. “It’s just means that if it happens, we’re going to take advantage of it.” 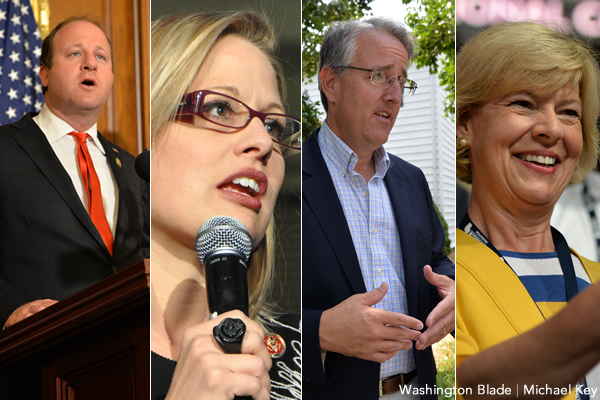