Jay Michaelson: So, here we are at the end of a strange year for LGBTQ Americans. On the one hand, mainstream acceptance of gay people continues to spread; gays are now officially boring. On the other hand, trans people are being singled out for government persecution on the one hand and continued street violence on the other.

Meanwhile, as all three of us have written, the Trump-Pence administration is inflicting the “death of a thousand blows” against LGBTQ civil rights, severely limiting employment rights, marital rights, access to healthcare, access to safe facilities in schools, and so on–while literally erasing LGBTQ people from government forms, proclamations, and observances.

For that reason, it’s even harder than usual to look toward 2018 with any sense of certainty. What are we most hoping for in the year to come? And what do we fear?

Samantha Allen: I have written the word “bathroom” hundreds of times over the past two years of covering the various state-level attempts to restrict transgender people’s restroom use. I wish I never had to type it again; I didn’t sign up to be a reporter to write about the human excretory system every week.

But in 2018, I am hoping to talk about bathrooms a lot less frequently—and I have reason to believe that will be the case.

One of the most important victories for transgender people this year came in the form of something we avoided: a “bathroom bill” in Texas that would have effectively made birth certificates into tickets of entry for restrooms in public schools and government buildings. But that was scuttled at the last second by the business community, local law enforcement, and a sympathetic speaker of the House who said he “[didn’t] want the suicide of a single Texan on [his] hands.”

I was in the state this summer when this thing almost got passed and I witnessed firsthand the gloriously outsized Texas rage against a bill that could have cost them billions (Tim wrote about the Texas bathroom battle at the time for the Daily Beast).

RELATED IN ARTS AND CULTURE

If States Got LGBT-Friendlier, They Could Earn Billions

The Media Doesn’t Know How to Talk About Bisexuality

Between that and North Carolina being forced to repeal the most controversial aspects of HB 2 under pressure from the NCAA, I’m confident that we’ll see some—but fewer—red-state legislatures really push for “bathroom” bills. They’re political losers and money drainers—and everyone in elected office knows that by now.

Tim Teeman: I’d like to share your optimism, but Roy Moore supplies a harsh corrective—for me anyway. In the celebrations that followed his defeat at the hands of Doug Jones in the Alabama Senate race, some difficult questions were left hanging.

Moore was a candidate whose rampant homophobia–his actual desire to see discrimination enacted against millions of LGBT Americans, his desire to see prejudice and discrimination enshrined in law–went mostly unchallenged and unquestioned. Only on the last day of the race did Jake Tapper of CNN ask his spokesman whether Moore believed homosexuality should be illegal (the answer: “Probably”).

This was a shameful and telling omission by the media. The depressing footnote to Moore’s loss is that extreme homophobia itself is not a disqualification for a political candidate in 2017. Active homophobia was seen as a valid mandate to hold by the modern Republican Party.

Moore was only too happy to hold it close even in defeat, as he showed by posting (on Facebook) Carson Jones, Doug Jones’ gay son’s, post-election interview with The Advocate. It was a sly attempt to stir up anti-gay poison. Politicians like Moore are thankfully fewer and fewer in number, but homophobia and transphobia are still a major currency in this White House—and that Trump and other of Moore’s high-profile Republican supporters don’t see it as a disqualifying characteristic tells us something very sad and alarming indeed.

“Since ordinary gays are now not so novel, Hollywood’s search for novelty is causing them to explore stories of people of color, rural folks, genderqueer folks, and other people who aren’t Will or Grace”

Jay Michaelson: I am putting most of my hopes outside the machinery of the state. Hollywood told some beautiful queer stories in 2017; I hope this expands and continues in 2018. A decade ago, when I was a professional activist, we had it drilled into us that the number one factor in someone “evolving” on any particular LGBTQ issue was knowing someone who was L, G, B, T, or Q. And if they didn’t have firsthand knowledge, media figures counted too.

So, while the Republican party caters to its Christian Right base, I hope that continued media visibility makes them pay for doing so. There’s a nice irony too: since ordinary gays are now not so novel, Hollywood’s search for novelty is causing them to explore stories of people of color, rural folks, genderqueer folks, and other people who aren’t Will or Grace. That might not be for the best motive, but the consequences could be profound.

Tim Teeman: Then we have the ‘wedding cake’ case at SCOTUS, which you have written about Jay. That seems currently going in favor of the baker refusing to bake a wedding cake for a gay couple. This isn’t just about a wedding cake, of course, but providing a signal that discrimination based on “beliefs” is OK, which can be used against LGBT people in so many contexts.

Samantha Allen: I’m afraid the Trump administration’s attacks on the LGBT community will continue to be so persistent and so piecemeal that they will continue to get shuffled to the side. This past month, we were stunned when the Washington Post reported that the CDC had been discouraged from using the term “transgender” in preparing their annual budget, but if people had been paying closer attention to Trump’s appointments in the Department of Health and Human Services and other federal agencies, this wouldn’t have been a surprise.

We can’t afford to pretend anymore like these are stunningly cruel attacks that come out of nowhere: leaders of anti-LGBT groups regularly walk the White House halls, they wield tremendous influence right now, and the administration is quietly giving them what they want.

“I’m worried that, with so many other scandals dominating the headlines, the systematic erosion of LGBT rights will continue to fly under the radar”

Trump’s tweets on transgender military service created a media shockwave, but that moment aside, the administration’s attacks on LGBT people in 2017 have been considerably less flashy: amicus briefs filed to the Supreme Court, tinkering with executive orders, adjusting the Department of Justice’s approach to transgender students. All of these perniciously subtle attacks have taken place against a cultural backdrop of continuing bigotry and violence: In the last year, for example, at least 28 trans people have been killed, most of them transgender women of color.

Tim Teeman: I think one of the things the U.S. would do well to figure out (he said vainly) is the separation of Church and State. The Religious Right has such a grip on the levers of power here, in certain states and in certain administrations like President Trump’s which is greatly relying on the bedrock of its support. LGBT people, activists and groups are facing a traumatic 2018, as the far right of the Republican support seeks to shore up support around Trump, and trans people especially are especially vulnerable in such an atmosphere.

Jay makes a good point: at a time when the Right seeks a ratcheting up of the LGBT culture war, LGBT people and their straight allies working in the culture at large should work to put a wide diversity of LGBT lives and characters into that culture, whether it be TV, film, literature, art, or whatever. Actual LGBT presence will be vital in 2018.

“If this global backlash isn’t stopped, queer people will be murdered, arrested, targeted, stigmatized, and forced to leave their countries (and then denied refugee status) in numbers we have never seen before”

Samantha Allen: The “death of a thousand blows” of LGBT rights under Trump is only going to continue in 2018, and I’m worried that, with so many other scandals dominating the headlines, the systematic erosion of LGBT rights—a phenomenon that’s directly affecting at least 4 percent of the U.S. population and 7 percent of millennials—will continue to fly under the radar.

That’d be like the Trump administration deciding one day that everyone in the state of Pennsylvania didn’t deserve human rights—and it somehow not being front-page news every single day until it got fixed.

Jay Michaelson: My greatest fear for 2018 is on a somewhat macro-scale. The rise of nationalism, nativism, and right-wing populism around the world is terrifying. On one level, it’s an understandable backlash against globalization, multiculturalism, and technology: people unable or unwilling to change are clinging to old identities and myths. But it’s also profoundly dangerous, and queers are just one population endangered by it. It’s not to be taken lightly.

In 2018, the US will practically zero out its aid to vulnerable LGBT populations around the world. At the UN as elsewhere, America is now allied with Putin’s Russia, in this case withdrawing protection from LGBT people and instead defending the oppression of us.

But this is just the beginning. If this global backlash isn’t stopped, queer people will be murdered, arrested, targeted, stigmatized, and forced to leave their countries (and then denied refugee status) in numbers we have never seen before.

“Figure out some way to help those who don’t have as much, or who are especially politically and culturally vulnerable, and who could do with support. Give money, volunteer, whatever—do what you can”

Tim Teeman: On that basis, LGBT people and their allies with any time, money, commitment and energy might think about involving themselves with activism and campaigning for organizations like The Trevor Project, HRC, Anti-Violence Project, National Center For Transgender Equality, GLSEN, PFLAG, OutRight Action International, and groups in their local area. If they don’t want to do something overtly political, then maybe figure out a way to help those who don’t have as much, or who are especially vulnerable, and who could do with support–whether that be financial and pastoral.

If you need inspiration, look to Nathan Mathis who wasn’t going to let Roy Moore win–or lose at it turned out–in Alabama without shaming him over his homophobia; and without remembering, in the most moving way possible, his dead lesbian daughter, Patti Sue.

Listen to, and be inspired by, the stirring stories of those from times when things were not just bleak but political progress and cultural evolution seemed alien and utterly distant. Eric Marcus has distilled, and continues to distill, amazing interviews with the likes of Sylvia Rivera and Frank Kameny, conducted for his landmark book Making Gay History: The Half-Century Fight For Lesbian and Gay Equal Rights, into a must-listen podcast. 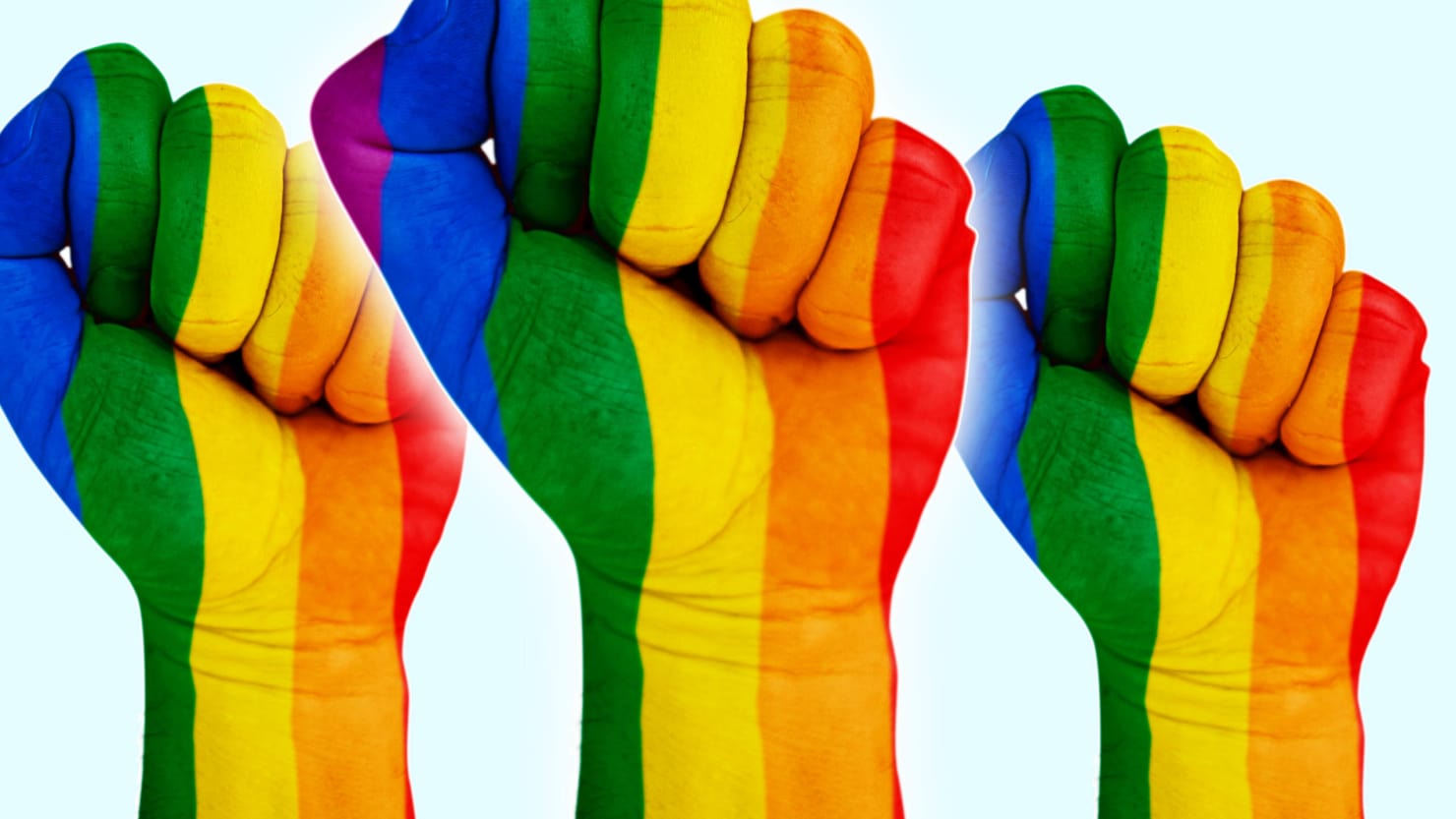