Shakeups in the U.S. Senate led to news Tuesday that two prominent Republicans and former presidential candidates who have anti-LGBT records — Mitt Romney and Michele Bachmann — may run in 2018.

Following passage of tax reform legislation, Sen. Orrin Hatch (R-Utah) announced he’d retire after four decades in the Senate, opening the door for Mitt Romney, who had publicly mulled the idea of running for the seat.

Meanwhile, former Rep. Michele Bachmann said on the Christian Broadcasting Networkshe’s considering a run for the seat in Minnesota being vacated by Sen. Al Franken (D-Minn.) amid allegations of sexual misconduct against him.

Bachmann, however, said she’s not certain and would consult God on whether she’s being called to pursue the open seat.

“If you’re going against the tide in D.C., if you’re trying to stand for biblical principles, and you stick your head up, the blades come whirring and they try to chop you off,” Bachmann said during the interview. “We’re trying to be wise. Should we do this? Shouldn’t we do this?”

Both Romney and Bachmann have extensive anti-LGBT records as public officials.

As Massachusetts governor, Romney most famously sought to limit the 2003 Goodridge decision at the Massachusetts Supreme Court making the Bay State the first with marriage equality and became a national spokesperson in favor of the Federal Marriage Amendment, which would have banned same-sex marriage nationwide.

According to MassEquality, Romney abolished the Governor’s Commission on GLBT Youth and rescinded an executive order prohibiting sexual orientation discrimination in the state workforce.

True to his reputation as a flip-flopper, Romney has also stated contradictory positions on LGBT issues. As a U.S. Senate candidate in 1994, Romney told Log Cabin Republicans he’d co-sponsor the Employment Non-Discrimination Act and would seek to expand it to include housing and credit, but later in 2006 said he doesn’t support ENDA and in 2007 called it a state issue.

A longtime favorite of social conservatives, Bachmann has an anti-LGBT record that has animated her career as far back as 2004 when she also championed the Federal Marriage Amendment and said “Gays live a very sad life” and “it’s part of Satan.”

In the course of her career in Congress, Bachmann voted against hate crimes protections legislation, repeal of “Don’t Ask, Don’t Tell,” and a version of the Employment Non-Discrimination Act. She was elected to Congress too late to have voted on the Federal Marriage Amendment in either 2004 or 2006.

In 2012, both Romney and Bachmann in pursuit of the Republican presidential nomination staked out anti-LGBT positions and continued their push for a U.S. constitutional amendment that would have banned same-sex marriage nationwide. Bachmann ended up losing the nomination to Romney, but Romney came up short in his bid to unseat President Obama, who went on to serve a second term.

Both candidates signed a pledge with the anti-LGBT National Organization for Marriage committing themselves to back a Federal Marriage Amendment; defend the anti-gay Defense of Marriage Act in court; support legislation allowing D.C. residents to vote on its same-sex marriage law; and appoint a presidential commission to “investigate harassment of traditional marriage supporters.”

But after his defeat in the 2012 election, Romney made some surprising statements that struck a different tone in contrast to his anti-LGBT record. Romney recommended Arizona Gov. Jan Brewer veto a “religious freedom” bill seen to enable anti-LGBT discrimination. (Brewer took that advice and vetoed the bill, unlike Mike Pence, who as Indiana governor signed a similar measure and was forced to sign a “fix” amid criticism from the LGBT community and business advocates.)

After the mass shooting in 2016 at the gay nightclub in Orlando, Fla., that killed 49 people and wounded 58 others, Romney took to Twitter to say he and his wife would “say a special prayer for the LGBT community that was the focus of this attack.”

But Romney hasn’t publicly turned around from his opposition to same-sex marriage. In 2014, Romney said he still opposes same-sex marriage and it could be “generations” before the negative impact of marriage equality is determined.

Fred Karger, a gay consultant to Republican presidential candidates and himself a candidate for president in 2012, said Hatch is retiring to make room for Romney because the Mormon Church pushed out the former “in favor of a more obedient Mormon Church member.”

“Mormon Church leaders have been on a full-time mission for over a year to do just that,” Karger said.

Noting the history of antagonism between President Trump and Romney, who has called him unfit to serve in the White House, Karger predicted friction between the two if Romney is elected.

“It’s a case of the Mormon Church trumping Trump and his desire to keep Mitt Romney 2,000 miles away from Washington,” Karger said. “It will be fun to see Romney try and take on President Trump as he has in the past, only to be annihilated by the far more savvy politician.”

Bachmann hasn’t changed her tune at all. Earlier this year, Bachmann said President Trump was elected to the White House despite the odds against him because the Obama administration issued guidance requiring schools to allow transgender kids to use the restroom consistent with their gender identity, or as she put it “just issued a sheet of paper and said, overnight, every single public school in the country would have to have the girls’ bathrooms open to the boys and the boys’ bathrooms open to the girls.”

The advancement of transgender rights, Bachmann said, was too much for God, whom she “answered the prayers of believers beseeching him, and he’s given us a reprieve.”

Both Romney and Bachmann would be running in a mid-term when Democrats have considerable momentum amid discontent with Trump. But Romney might be a shoe-in to win in the conservative state of Utah. Bachmann would likely run against Minnesota Lt. Gov. Tina Smith, whom Gov. Mark Dayton tapped to succeed Franken on an interim basis.

Lucas Acosta, director of LGBT media for the Democratic National Committee, said voters won’t forget the anti-LGBT records of Romney and Bachmann as they head to the polls in the congressional mid-terms.

“Americans have already rejected the anti-LGBTQ extremism of Republicans like Michele Bachmann and Mitt Romney,” Acosta said. “Not only are their hateful views out-of-step with the country, but with a majority of Utahns and Minnesotans alike. Voters deserve candidates who will fight to protect their freedom to serve, work and love whomever they choose regardless of gender.” 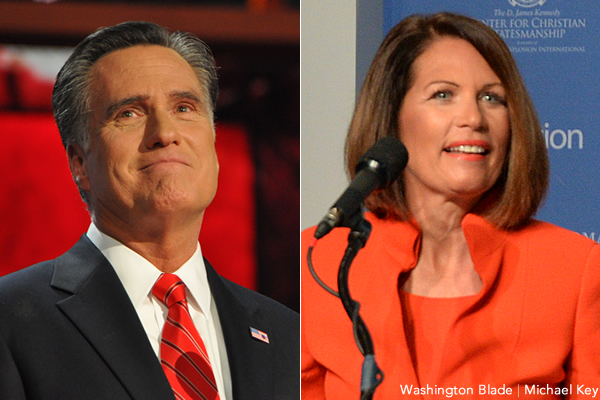