Skip to content
Previous Next
After coming out, H.S. football star is headed to Indiana State

High school football star Jake Bain is tackling homophobia head on. In October, he came out during an assembly at his high school in St. Louis, Missouri. Then in December, the athlete accepted a scholarship to Indiana State University after he came out as gay to the university’s head coach.

The 18-year-old football captain said he came out publicly to send a positive message to other LGBTQ athletes.

“Playing football and being gay, those two things don’t really collide with each other usually, at least not in the public eye,” Bain told NBC News. “So, I thought it would be nice for people out there who might have insecurities about coming out, if they saw someone like me who is a successful football player and who can also be openly gay.”

Lesbian, gay, bisexual, transgender and queer student athletes generally experience a more negative climate than their straight peers, with 85 percent saying they have been subjected to verbal slurs, according to advocacy group LGBT SportSafe. The organization’s co-founder, Eric Lueshen, said homophobia manifests itself in sports largely due to stereotypes around masculinity and femininity. In masculine sports like football, he explained, gay players are seen as anomalies. Bain, a running back, finished his high school football career with 50 touchdowns, 3,700 rushing yards and a stellar 255-yard game in a state championship victory. But after he came out, his reputation was no longer only about his skills on the field. His sexuality, he said, made him a target to some opposing players. When they tackled him, he recalled, they would often yell slurs at him.

“People would say things like ‘Stay down you f—g’ or ‘Gay people aren’t meant to play football,’ things of that nature,” he said.

“It definitely hurt a lot,” he added. “The thing that hurt the most, was people were attacking me for something that I couldn’t change.”

While opposing players could be cruel, Bain said his teammates had his back “no matter what.” He recalled one teammate who defended him after an opposing player stomped on him and called him a slur after he was tackled.

“One of my players actually got up and got in the kid’s face and started talking to him — like yelling at him — telling him to mind his own business and stuff like that,” Bain said. “Just seeing that, seeing my teammates who are really willing to go to battle for me, it was just really a great feeling for me.”

For LGBTQ Community, 2017 Was A Mixed Bag

Bain said his coach, John Merritt, who is African-American, was especially supportive.

“He shared stories with me about how when he was growing up playing football, a lot of people would make fun of him on the field because of his race,” Bain said. “So he definitely gave me some good insight on ways to kind of prepare for it and to be ready for it when it happens and how to respond.”

Bain said Merritt always encouraged him and his the teammates to take the high road when opposing players made insensitive or offensive comments.

“I think he knew we were going to hear those things throughout the season,” Bain said, “so he made a point to talk about how the best way to kind of react to those people on the field is to group together as a team and retaliate with our play instead of with our words.”

Bain said that receiving support from his community has made him a stronger person.

As more and more LGBTQ athletes like Bain come out, they create a more accepting environment for their peers, according to Lueshen. But while female athletes have many out role models, like WNBA player Brittney Griner and soccer star Megan Rapinoe, he said visibility remains a challenge for gay athletes in professional men’s sports.

“Having a role model to look up to, whether it’s in the NBA or NFL, especially for a young gay athlete — whether they’re closeted or open — that’s extremely important, because you really ultimately have to be seen in order to be understood, and so without being visible the only thing that people have to make judgments off of are those stereotypes,” Lueshen said.

When LGBTQ players come out, Lueshen added, their communities typically embrace them. “Most of the difficulties either closeted or openly LGBT athletes experience … stem from a personal or internal struggle to accept themselves,” he explained.

After battling his internal struggles with coming out, Bain is now focused on helping others and breaking down external barriers. Before he committed to Indiana State University in December, for example, Bain sat down with the school’s head football coach to tell him he’s openly gay and has no intention of hiding his sexuality.

“They’ve said from the very beginning they’re going to embrace me 100 percent for who I am and that my sexuality isn’t going to be a factor at all on the team or within the community,” Bain said. “So just to know that I’m already going to have people who are going to support me, like my teammates now do, it’s definitely a good feeling.”

In addition to receiving the full support of his football team, Bain said he has also received support from the wider high school community. Before he came out officially to the whole school in his October speech, he attended the junior prom with his boyfriend last May. The couple also plan to go to the senior prom together this year.

“I think people genuinely love to see that myself and him are able to be ourselves and be who we want to be and not have to worry about people around us making fun of us or passing judgment on us,” he said.

Since coming out, Bain said he has received thanks from youth around the country — including athletes from other high schools — who have lauded him for being an out role model.

“There’s been a lot of students, both out and who have yet to come out, who have approached me since I’ve come out,” he said, “and the message they’ve given me is that I’ve led the way for them to be whoever they want to be.” 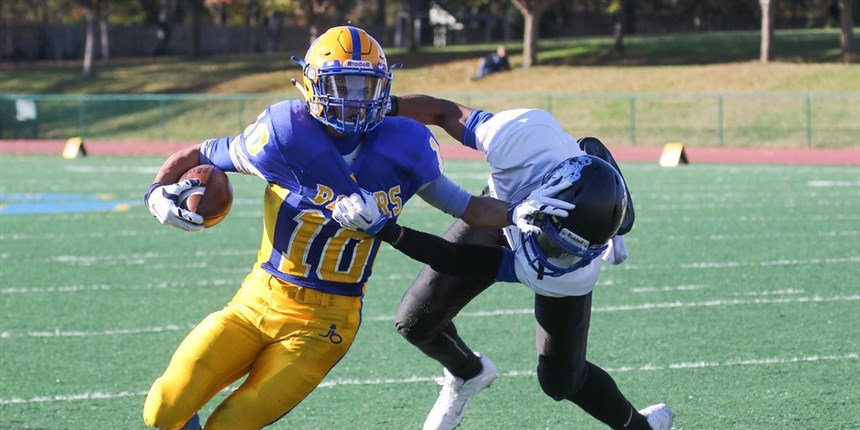