Skip to content
Previous Next
What Has Sen.-Elect Doug Jones Said About LGBT Rights?

Democrat Doug Jones, who will be Alabama’s next U.S. senator, beat one of the nation’s worst homophobes, former Alabama Supreme Court Chief Justice Roy Moore, in a special election Tuesday. Jones is obviously preferable to Moore — just about anyone would be. Jones didn’t emphasize LGBT issues on the campaign trail, leading to questions about just how much he’s on our side.

The answer, though, is there’s no reason to worry.

Jones “is skilled at muting his liberal stands on such issues as abortion and gay rights — a necessity in one of the South’s most conservative states,” the Los Angeles Times noted this week. But that doesn’t mean he doesn’t have them.

Some of the evidence came in a video posted to YouTube in October by Dean Young, a friend and supporter of Moore. The video’s title now seems ironic: “Doug Jones Commits Political Suicide in Alabama Senate Race.”

It shows Jones at a campaign event, where someone questioned him about transgender people’s rights, including access to the restrooms of their choice. “We’ve got to protect them,” Jones replied, adding, “They were wrong to get rid of those Title IX rules, you know.” That’s a reference to the Trump administration’s withdrawal of guidelines that advised school districts to allow trans students appropriate restroom access to stay in compliance with Title IX, the federal law banning sex discrimination in education.

Jones also said of the Trump administration, “They were wrong to ban transgender [people] from the military. Just wrong, wrong, wrong.”

The video didn’t exactly go viral – it had about 20,000 views on YouTube – but it wasn’t obscure, either. It was featured on AL.com, a website for several of Alabama’s larger newspapers, and on the Moore-loving right-wing site Breitbart. AL.com sought comment from Jones’s campaign, which delivered this statement, getting in a dig at North Carolina’s infamous anti-LGBT House Bill 2:

“The Roy Moore campaign is obviously running scared because they are sinking to divisive fear tactics. Doug Jones supports equality, unlike Roy Moore, who believes it is perfectly acceptable to discriminate against people, which would destroy businesses and opportunities for the people of this state. Roy Moore’s extreme and controversial views backfired in North Carolina and cost that state and its businesses tens of millions of dollars. That’s why business leaders disagree with Moore’s extreme views, which are outside of the mainstream.”

Moore later criticized Jones for his “very liberal” stance on “transgenderism” and said he refused to debate Jones because of that.

Earlier, Jones had responded to the trans military ban by saying he was tired of “government by tweet,” according to the Montgomery Advertiser. “A series of three tweets catching tens of thousands of active military personnel off guard and having no official standing is no way to run a government,” he added.

Jones is also reportedly a marriage equality supporter, but definitive quotes on that are hard to find. During the campaign, he emphasized what he called “kitchen table” issues like the economy and health care. He’s for improving the Affordable Care Act, not repealing it; against big tax cuts for the wealthy; and for abortion rights. And he believes climate charge is real.

On civil rights, his campaign website noted that as a U.S. attorney, he led the prosecution of Ku Klux Klan members responsible for the Birmingham church bombing in 1963 that killed four young African-American girls, and that of abortion clinic bomber Eric Rudolph. He struck an inclusive tone of equality for all.

“I believe that we are all created equal in the eyes of the Lord and the law,” the site reads. “While we have made progress on civil rights as a nation, we cannot be complacent with continued threats to equality and justice. The racially motivated Charleston church massacre and Charlottesville are stark reminders of that continued threat. I believe that the United States of America is a land of laws, justice, freedom, equality, and opportunity.”

So, while Jones’s support for LGBT rights may have sometimes taken a backseat to other issues, it’s definitely there. LGBT and other constituents will be holding him accountable as he serves in the Senate, as well they should. Right now it appears, though, that Tuesday’s election was not just the defeat of an enemy, but a victory for an ally. 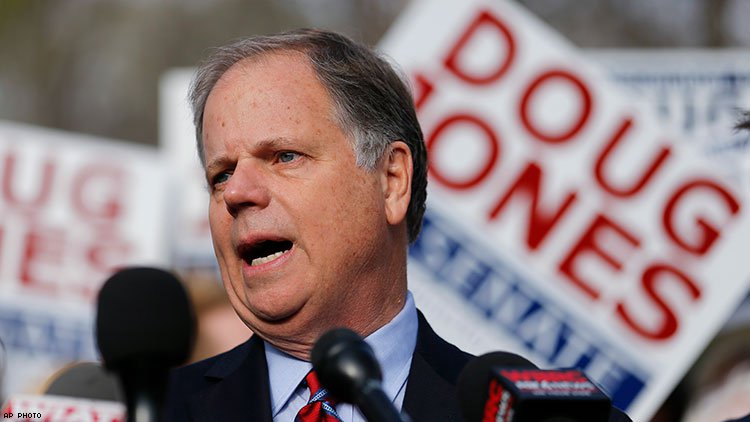